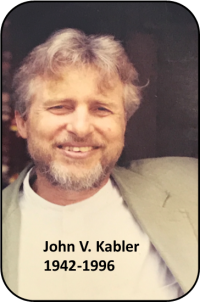 Established in 2001, the John V. Kabler Memorial Award is presented annually to Maryland’s most outstanding environmental leaders and organizations. Awardees are selected at the discretion of Maryland LCV’s board of directors.

John Valentine Kabler dedicated his life to the people he loved, to making change through the political process, and most importantly to the Chesapeake Bay. Kabler’s work helped create protections for Maryland and the Chesapeake Bay that benefit us all today. He played a crucial role in banning the use of phosphate detergents in the Bay area, and he worked to create non-tidal wetlands protection and the state’s Critical Areas program that controls waterfront development.

Motivated to act on behalf of the environment in the wake of the Three Mile Island crisis in the late 1970s, John Kabler inspired a handful of his environmental colleagues to become active in political campaigns. Together these leaders founded the Maryland League of Conservation Voters in 1979. Until his death in 1996, John Kabler was a key leader of the Maryland conservation movement.

Sandy Kabler, the wife of the late John V. Kabler, remembered his passion and dedication to preserving the Chesapeake Bay: “John saw a need for action and leadership to protect the Chesapeake Bay and stepped up to bring the community and leaders together and hold our elected officials accountable. He worked tirelessly to protect a key asset in our ecosystem and community.”

The award is dedicated to John Kabler’s enduring memory and the principles he fought for and cared about so deeply.

Legislator of the Year

Established in 2012, the Legislator of the Year Award honors environmental champions from the most recent legislative session. Awardees are selected based on leadership and commitment to promote and pass equitable laws and policies for clean water, healthy air, and a resilient climate.

In recognition of the individual, group, or organization whom through a specific action, event, or body of work will leave a positive conservation legacy that mirrors the ethos of President Theodore R. Roosevelt, often considered the “conservationist president.”