By a bipartisan vote of 310-107, the U.S. House of Representatives today passed the Great American Outdoors Act (GAOA), a landmark environmental bill that will restore parks and public lands in Maryland and across the country and fully fund the Land and Water Conservation Act (LWCF). The bill, which passed the Senate on June 17, now heads to the White House for President Trump’s signature.

“The passage of the Great American Outdoors Act is a significant victory for Maryland,” said Maryland League of Conservation Voters Executive Director, Kim Coble. “The bill guarantees that Marylanders will have access to clean, safe, and healthy parks for years to come.”

Check out our press release here.

Maryland members of Congress and how they voted:

Sign our Thank you card to Majority Leader Hoyer and other members of congress who voted for the Great American Outdoors Act and permanently funding the Land and Water Conservation Fund.

The Land and Water Conservation Fund (LWCF) has supported or enhanced the protection of many of the most special parks and other natural areas across the state. 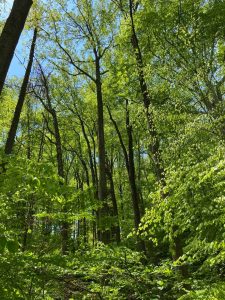 The Fund was permanently authorized in 2019, but that does not guarantee that the $900 million put into the LWCF account every year will be spent on conservation. Over the 55 years of the program, billions of dollars have been siphoned from the fund for other non-conservation purposes. In fact, this past fiscal year 2020, only $495 million was appropriated to LWCF—far short of full funding, and yet the highest amount in 15 years.Maryland is filled with hidden treasures of natural beauty. A true “America in miniature,” our wonderful state has towering tree-covered mountains in the west, and long stretches of sand-covered beaches on our Eastern Shore, and is home to the bountiful Chesapeake Bay.

That means the money that should have gone to increasing recreation opportunity for all, protecting our parks from being sold off to the highest bidder, providing close-to-home playgrounds and ballfields to support healthy kids and families, safeguarding our drinking water supplies, and keeping working forests in sustainable operation instead of subdivided and developed — went somewhere else.

The Land and Water Conservation Fund (LWCF) has provided funding to help protect some of Maryland’s most special places and ensure recreational access for hunting, fishing and other outdoor activities.

For example, the FLP contributed to places such as the Broad Creek in Dublin and the Coastal Bay project in Snow Hill. FLP has directly protected 2,014 acres in Maryland. The program assists states and private forest owners to maintain working forest lands through matching grants for permanent conservation easement and fee acquisitions, and has leveraged approximately $4.6 million in federal funds to invest in Maryland’s forests. These forests enhance air and water quality and provide wildlife habitat and recreational access.

Active outdoor recreation is an important part of the Maryland economy. The Outdoor Industry Association has found that active outdoor recreation generates $14 billion in consumer spending in Maryland; provides 109,000 jobs that generate $4.4 billion in wages and salaries; and produces nearly $951 million annually in state and local tax revenue. Further, the U.S. Census reports that each year over 2.7 million people hunt, fish, or enjoy wildlife-watching in Maryland, contributing over $1.6 billion in wildlife recreation spending to the state economy.