Check out our Rally and Action Week Kick-off from Monday, February 22, 2021

The new polling, which was commissioned by the Maryland League of Conservation Voters, was released today as the Climate Solutions Now Coalition brings together hundreds of climate-action supporters for an online rally to urge legislative approval of comprehensive climate and transportation legislation this year. The lead sponsors of major climate action legislation will speak at the 5 p.m. rally, along with  national climate-action leader Bill McKibben, co-founder of 350.org.

The poll found that voters strongly support a wide array of strategies to address climate change. Among the findings, the poll showed:

The poll also found strong support for requiring oil and gas companies in the state to pay some of the costs related to adapting to climate change, including investments in transportation infrastructure and sea level rise (76%). Click here for a memo summarizing the poll’s findings.

Major legislation pending in the General Assembly, the Climate Solutions Now Act, would move Maryland’s Greenhouse Gas Reduction mandate to net neutral by 2045, as recommended by the Maryland Commission on Climate Change, and plant 5 million trees by 2030.

“We need to move with the urgency that conditions require,” said Sen. Paul Pinsky, lead Senate sponsor of the climate bill. “Maryland has a great opportunity to set a more aggressive pathway to address climate change. Now is the time to act.”

“Climate change is the challenge of our time — threatening public health, public safety and the environment,” said Del. Dana Stein, the House sponsor of the climate bill. “The Climate Solutions Now Act responds to this challenge by requiring Maryland to get to net zero emissions by 2045 and implementing several measures to help us get to net zero.”

One key finding in the poll was that voters strongly support (86%) planting millions of trees to help improve water quality and remove carbon pollution from the air – a strategy called for in the Climate Solutions Now bill.

“Trees naturally filter water and air as well as sequester carbon,” said Doug Myers, Senior Maryland Scientist for the Chesapeake Bay Foundation. “These qualities fight climate change, but trees have so many other benefits, including providing habitat to animals, increasing property values by beautifying communities, and preventing heat islands in urban areas where temperatures rise significantly higher in areas without trees than those with them. The tree planting goal in this bill will bring these benefits to neighborhoods throughout Maryland as well as help the state meet its Chesapeake Bay cleanup goals.”

A key piece of legislation, the Transit Safety and Investment Act, would mandate $123 million annually from the Transportation Trust Fund for the next six years to address the transit repair needs identified by the MTA. This guaranteed funding is essential to ensure that the investment has long-term benefits of economic stability and job growth. The General Assembly is also considering the Zero-Emission Bus Transition Act, which would require that all buses purchased by the Maryland Department of Transportation beginning in 2023 be zero emission, ultimately leading to a complete fleet transition.

“Given that transportation is the largest contributor to greenhouse gas emissions, transportation policies and climate policies are tightly connected,” Coble said. “This poll confirms what we consistently hear: Marylanders want the state to be a national leader in addressing the climate crisis and ensuring the transportation infrastructure serves us well and equitably.”

Along with their own support for climate action, Maryland voters also want their elected representatives to support such policies. At least seven in 10 say they would be more likely to vote for a candidate for Maryland political office who backs investing state dollars to upgrade the electric grid and expand the production of renewable energy (73%), requiring fossil fuel companies to pay a tax on their carbon pollution (71%), and reducing greenhouse gas emissions 60% from 2006 levels by 2030 (70%).

The poll was conducted by Nexus Polling and the Yale Program on Climate Change Communication finds strong support for policies to improve transportation and address climate change in the state. The representative survey of 553 registered Maryland voters was conducted from January 27 to February 4, 2021, and has a margin of error of +/- 4.5%.

The Climate Solutions Now Coalition is a statewide umbrella group bringing together dozens of organizations and individuals working to strengthen Maryland’s response to climate change.

A recent poll — conducted for the Maryland League of Conservation Voters (LCV) by Nexus Polling and the Yale Program on Climate Change Communication — finds strong support for policies to improve transportation and address climate change in the state. The representative survey of 553 registered Maryland voters was conducted January 27-February 4, 2021, and has a margin of error of +/- 4.5%

Coronavirus response, infrastructure funding and climate action are seen as top priorities for Maryland this year.
More than eight in 10 Maryland voters say passing economic stimulus legislation (83%) and public health legislation (81%) in response to the coronavirus pandemic are important priorities for the Maryland state government this year, including more than six in 10 (61% and 61%, respectively) who say they should be top priorities. Transportation infrastructure is also seen as a high priority by voters in the state: About eight in 10 also say investing more in transportation infrastructure such as roads and bridges (83%) and passing an infrastructure spending bill to update and modernize Maryland’s infrastructure (78%) should be priorities. Roughly seven in 10 see addressing racism (73%) and passing a comprehensive bill to address climate change (69%) as important priorities for the state this year. And 72% of respondents said they support requiring utility companies in Maryland to generate 100% of their electricity from renewable sources by 2030.

Not only do Maryland voters support climate policies, but they want their elected representatives to support them as well.
At least seven in 10 say they would be more likely to vote for a candidate for Maryland political office who backs investing state dollars to upgrade the electric grid and expand the production of renewable energy (73%), requiring fossil fuel companies to pay a tax on their carbon pollution (71%), and reducing greenhouse gas emissions 60% from 2006 levels by 2030 (70%).

We can’t afford to wait any longer for climate action

Everyone has the right to breathable air, clean water, and healthy communities. And all of these are linked to the climate crisis here in Maryland.

Every year that we wait to take action against climate change, is less time we have to reverse its terrible effects.  We are experiencing a climate crisis — and greenhouse gas emissions are causing this crisis. Maryland is especially vulnerable to climate change. Floods and extreme weather events, such as heat waves and heavy storms are happening at an ever-increasing pace. We need to take action NOW!

Share with us your #WhyNow story and tell your story about why we need climate action NOW.

Think about the following questions as you write your story:

And when you are done, please share with us your social media handles and we will tag you if we use your story in our campaign. #WhyNow #ClimateSolutionsNow

Thank you for participating, we look forward to hearing your story!

The Brave New Virtual World of the 2021 Legislative Session 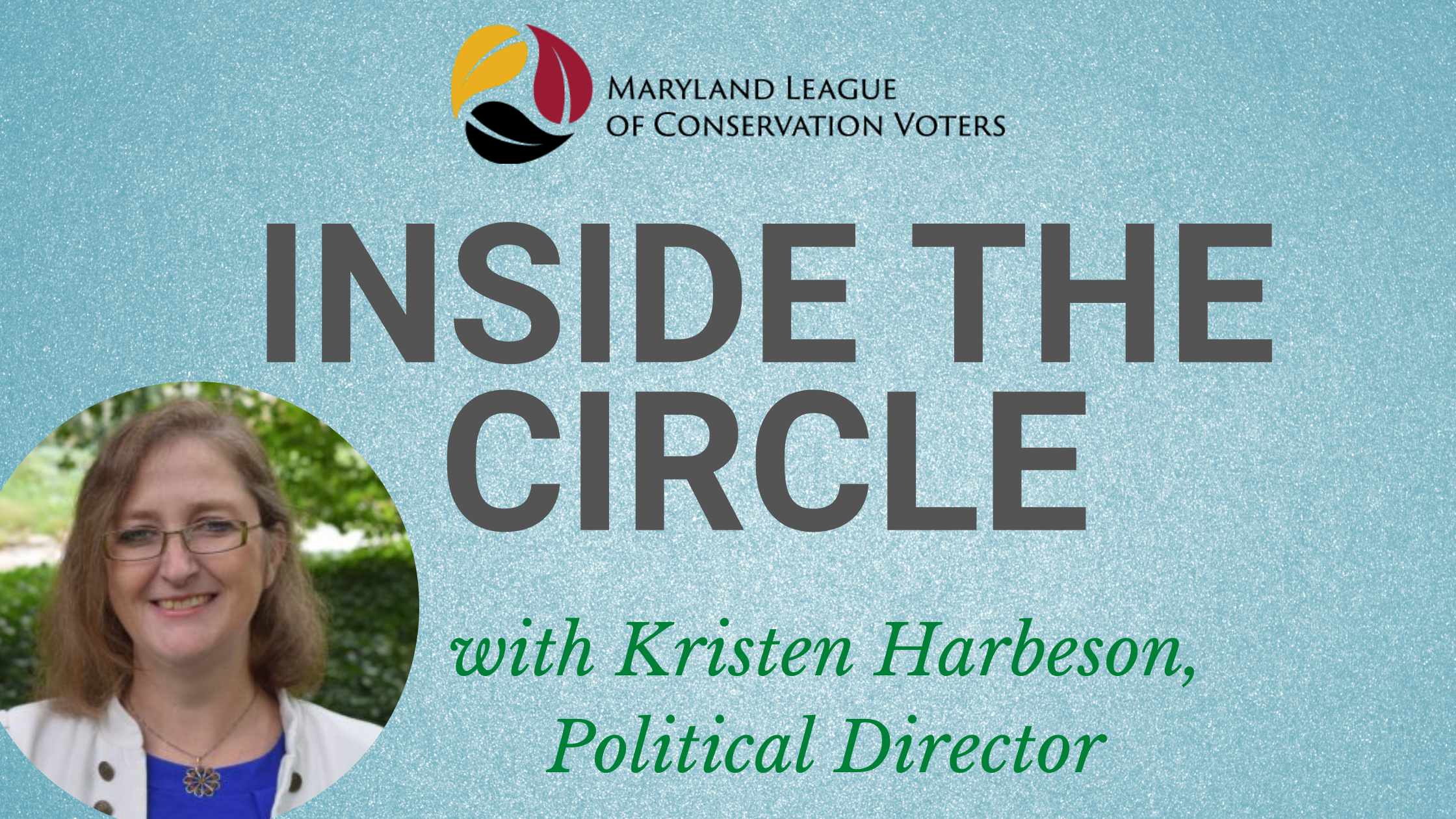 The Brave New Virtual World of the 2021 Legislative Session

There is an old saw around Annapolis that “every session is a special session.”  Every session is unique in its own special way.  Some sessions, however, are more unique than others, and this one certainly takes the cake.  Even veterans around the State Circle – legislative and lobbyist alike – are stumbling around like novices as we learn our way through the brave new world of Virtual Session.

To start with, most of us – including your Maryland LCV staff – are working our bills from the comfort (?) of our home offices, negotiating around spouses, children, and pets.  Gone, for the moment, are the hallway meetings, and the tips and (often critical) gossip gleaned from casual conversations around the charging stations and coffee shops.

On the other hand: gone, too are the opportunities that give high-dollar lobbyists advantages over the non-profit lobby corps and grassroots advocates. Without the Committee Dinners and other opportunities that deep pocket expense accounts allow, we’re all on more even footing. With committee hearings taking place over Zoom, any individual with a computer and an internet connection has exactly the same ability to testify without needing to drive to Annapolis or spend hours on inefficient, unreliable public transit.

This last point is especially salient for this legislative session as we continue the fight to secure adequate funding for the Maryland Transit Administration’s public transit infrastructure, which is the first bill that your Maryland LCV staff will be testifying on this year. Watch out for the recording of the virtual rally that happened on January 19th, and for the play-by-play live-tweeting of the hearing of Senate Bill 199, the Transit Safety and Investment Act on January 28th.

Public transit systems all over the country have seen a dramatic decline in ridership, but this is much less true in Maryland than it is anywhere else.  A large percentage of our essential workers, especially those in health care, have continued to count on our buses, subways, light rail, and trains to get to work. Unfortunately, Maryland’s buses, subways, light rail, and trains break down significantly more often than those in comparable systems around the country.

We are relying on essential workers, who are relying on unreliable public transit.  We all need and deserve safe and reliable transit.  Maryland LCV is leading the charge, with our partners, to improve our public transportation system for the sake of our environment, our health, and our economy. (Did you know that dollars spent on public transit yield roughly twice the jobs of the same amount spent on roads?)

We hope you’ll join us to bring this bill over the finish line by contacting your Delegates and Senators and ask them to pass the Transit Safety and Investment Act (HB 114/SB 199).  While the bill provides much needed funds to improve the transit system, these funds come from a reallocation of existing transportation funds. And stay tuned for next week when we report back on what happened in the hearing.

We can no longer wait to take action on climate change

Statement from Kim Coble, executive director of Maryland LCV on Maryland not participating in the first round of states for the Transportation and Climate Initiative program

Statement from Kim Coble, executive director of Maryland LCV on Maryland not participating in the first round of states for the Transportation and Climate Initiative program

“With the climate crisis accelerating, fueled by emissions from transportation, we are disappointed that Governor Hogan has not served as a leader on regional efforts to reduce emissions and formally committed to the Transportation & Climate Initiative.

We will continue working with the Hogan administration to ensure Maryland fully commits to this important program as soon as possible. The state needs to get on board quickly, because all Marylanders, and especially our communities of color, deserve clean air and an equitable and clean transportation sector that increases access to social and economic opportunities and reduces the negative health effects caused by air pollution.”