Where you’ll find the lobbyists in Annapolis

I love tracking my steps during session – wondering how many miles I logged in a day.  Although there are days when my feet ache from all the walking, there is at least as much sitting as there is walking: sitting in committee rooms (and occasionally on the floor outside of committee rooms); sitting around tables during coalition meetings and while talking to legislators; sitting in the public lounges for emergency conversations with colleagues.

One of the most likely places you’ll find me during much of the Session is in a wingback chair in the hallway on the second floor of the House Office Building.  From there, I can talk to Delegates and their staff pass by on their way to and from the Environment and Transportation and Economic Matters Committees.  I’m not the only one who tends to find herself there – it’s a spot where lobbyists from every kind of advocacy group will find a place to take a call, charge their phones, or catch a few minutes on their laptops between meetings.

These kinds of relaxed locations are where conversations happen that build community, and sometimes provide news in bits and pieces that, when taken together, can help provide context to help shape a legislative strategy. 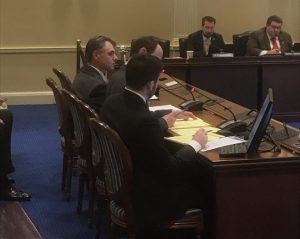 Ramon Palencia-Calvo, our Deputy Director testifies for one of our priority pieces of legislation.

This week there was a hearing on our first priority bill.  Ramon testified on the importance of fully funding the Maryland Transit Authority, which has a $2 billion shortfall over the next ten years according to a study released last summer. The MTA serves every jurisdiction in the state, but low-income and already disadvantaged communities suffer the most from failures due to inadequate maintenance. Additionally, a strong, affordable, and accessible public transportation system is essential to reducing Maryland’s greenhouse gas pollution. (Did you know that the transportation sector – especially highway traffic – represents more than 40% of our greenhouse gasses?!) This is always an important moment in a campaign.  It’s the first time that arguments for and against are presented side by side, and examined by the committees who make the decision of what happens next. It’s a little bit like a play, and a little bit like a polite boxing match.

In this case, the hearing was in front of the House Appropriations Committee which works with the State Budget.  Ramon, and all of our partners provided strong testimony after the bill was presented by Delegate Lierman.  The Department of Transportation spoke against the bill, which isn’t uncommon, especially for bills that require the Governor to spend money in a specific way. Next week, the same bill will be heard in the Senate, and then we work on the next step: A vote from subcommittee.

Sitting or standing, or running through the halls, you can count on your Maryland LCV staff working hard next week to pass strong environmental laws.  Next week we’ll have some marathon bill hearings, too, so stay tuned!