They say Never Fall in Love with a Bill

The conventional wisdom in Annapolis is that you never should fall in love with a bill – because it’s too hard to let it go when it changes or dies.  I’ve never been very good at not falling in love with the bills on which I work. I spend countless hours getting to know each of them, crafting them, getting to know their quirks, strengths, and weaknesses, believing in their value, and fighting for them. I don’t know how to do that without falling in love – and in truth, I don’t think very many people do. 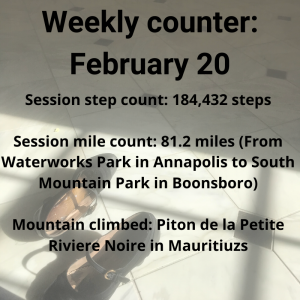 But as one of my favorite authors, Madeleine L’Engle, wrote about her marriage, “the growth of love is not a straight line, but a series of hills and valleys.”  The rest of the book (which is called A Two Part Invention if you’re interested) talks about how navigating those hills and valleys are about finding the way between where to hold fast and where to accept change, and also that sometimes when things are darkest, it’s important to take a minute to appreciate unexpected light.

This week, which saw hearings on two of our biggest priority bills.

The ban on Chlorpyrifos had several hours long hearings in both the House and Senate Committees. We put our best arguments forward – talking about the extreme dangers of the pesticide to the health of our communities, especially children, and our environment, and presenting the case for effective alternative treatments.  The opponents talked about the problems with banning the chemical, outlining the dangers of hard-to-kill pests to crops and the livelihood of the farmers, pleading for “last resort” exemptions.

The other bill is the ban on plastic bags and it was heard in the House of Delegates. Our coalition outlined the problems of plastic bags to the climate, waterways, and in our communities.  We explained how a 10c cost to paper bags at check-out ensures that businesses aren’t forced to raise prices, especially in low-income communities – and is necessary to drive the behavior change that actually reduces litter. Opponents argued there could be an unintended consequence to low-income communities from having to pay for bags that once had been given out for free.

The next step for both of these bills is to work with the committees to find the path through compromising and maintaining bill integrity to a bill we can support. How do we keep the legislation as strong as possible and address reasonable concerns outlined by opponents. How do we bring new people onto the path with us without losing key partners and allies? It can be a difficult process, and the path is definitely not a straight line.

These are the days, though, when I tend to look around at my colleagues (both in and out of the environmental community) and realize that I am not alone. We all have once again – for better or worse – fallen in love with our bills, but it’s really because we love Maryland, the General Assembly, and the process of passing laws we think make the world better. And that realization brings unexpected light in the deepest valleys.